There seems to be a near-consensus opinion that cannabis will continue to be one of the world’s fastest-growing industries over the next 20 to 30 years.

With medicinal and recreational cannabis legal to some extent throughout Canada and more American states jumping on board seemingly every year, the industry is in the early stages of a massive boom.

Of course, it’s not just companies directly involved in the cannabis business that stand to benefit. Several industries should see a boost in revenue as cannabis continues to become available legally to larger sections of the population of North America.

Scotts Miracle-Gro is one such company that has noticed the potential of cannabis – and they’re investing accordingly.

Scotts Miracle-Gro is by no means a new name. The company was founded in 1868 when founder O.M. Scott sold lawn seeds to members of the agricultural industry. By the early part of the 20th century, they were selling grass seeds to homeowners.

So, for over 150 years, Scotts has maintained one of the most recognizable brand names in lawn care, gardening, and pest control. In fact, the company has over 20 subsidiary brands throughout the U.S. and beyond.

While Scotts has never been the most glamorous company, there’s no denying that it has stood the test of time and been a reliable resource for consumers who care about having nice-looking lawns and gardens.

Growth in the industry can be slow, but there’s little chance of lawncare and pest control products ever going out of fashion.

As Scotts Chairman and CEO Jim Hagedorn puts it on the company’s website: “We help people express themselves on their own piece of the Earth—and there is virtually no limit to how they do that.”

For decades, the cannabis industry was non-existent, at least outside of the black market. It officially became a Schedule 1 Drug in the United States in 1970, making it illegal to possess or use, even for medical reasons. In 1906, California ironically became the first state to classify cannabis as a “poison.”

However, attitudes about cannabis have since changed considerably, especially after the turn of the century.

Beginning in 1996 when California became a trailblazer for cannabis, over 30 states and the District of Columbia have passed laws making cannabis legal for medical purposes.

But, in a way, the cannabis industry was truly born in 2012 when Washington and Colorado became the first two states to make recreational use of cannabis legal.

To date, 11 states and the District of Columbia have legalized recreational cannabis, while another dozen states have decriminalized it to one extent or another.

Perhaps equally important, Canada made recreational cannabis legal nationwide in October 2018, although each province and certain municipalities have more lenient local laws than others.

Nevertheless, with nearly a dozen American states and all of Canada making recreational cannabis legal and acceptable, the industry in North America is bursting at the seams.

It also helps that all but three states have legalized cannabis in some form for medicinal use.

Despite the laws being different from state to state, the cannabis industry has continued to grow year by year, reaching nearly $14 billion in North America alone in 2019, which was around 30% higher than the previous year.

That number is only expected to increase in the years ahead, as the industry still has plenty of room to grow, especially if more states join the list of those that have made recreational cannabis legal.

Consider this: it’s extremely difficult (or impossible) to sell out-of-state cannabis, even if it’s a neighboring state where cannabis is legal. Just imagine the growth potential when it inevitably becomes federally legalized and interstate commerce begins. The idea alone is staggering.

Importance of Fertilizer in Growing Cannabis

Because they sell fertilizer, Scotts Miracle-Gro has always been connected to the cannabis industry to some extent. And the importance of fertilizer in growing cannabis can’t be understated.

Like any other kind of plant, cannabis plants need fertilizer to bloom to their full potential. The right combination of nutrients in fertilizer is critical to growing buds, and will vary depending on the specific strain.

Naturally, different types of fertilizer have been created specifically aimed at giving cannabis plants the nutrients they need to maximize their growth.

As early as 2013, Scotts CEO Jim Hagedorn showed an interest in investing in the cannabis industry. He’s on record calling cannabis the “biggest thing [he’s] ever seen in lawn and garden.”

Relatively early on, he could see that if recreational cannabis becomes legal in a majority of American states and Canadian provinces, the potential growth is practically unlimited.

With Scotts already being a provider of fertilizer and other products that assist in the growth of plants, it seemed natural for Scotts to invest in the cannabis industry.

In 2015, Scotts Miracle-Gro took its first concrete steps into the cannabis industry by acquiring General Hydroponics, which facilitates a common method of growing cannabis plants, for a cool $130 million.

Scotts’ purchase of General Hydroponics also included the acquisition of its sister company Vermicrop Organics, which specializes in soil and fertilizer.

The two new properties joined the Hawthorne Gardening Company, which is a subsidiary of Scotts Miracle-Gro and the company’s branch that operates inside the cannabis industry.

Hawthorne Gardening Company’s properties also include Gavita, which deals with urban farming and hydroponics, and Botanicare, which sells a line of nutrients, supplements, and other supplies for serious gardeners.

Scotts made another addition to Hawthorne in 2017 when they acquired Can-Filters, a Canadian company that specializes in fans, filters, and anything else that relates to air filtering and air quality. That was followed by a $450 million purchase of Sunlight Supply, a hydroponics supplier, in 2018.

In a few short years, Scotts Miracle-Gro made a series of additions to its Hawthorne Gardening brand that were clearly aimed at gaining consumers who are growing cannabis plants.

In fact, with so many acquisitions to Hawthorne, it’s obvious that Scotts isn’t trying to win over people who are growing one or two plants in their home. Rather, they want to supply medium- and large-scale cannabis growers with fertilizer, hydroponics, and anything else they might need.

“Pretty quickly we realized that cannabis and hydroponics were a big opportunity,” explains Chris Hagedorn, the general manager of Hawthorne. “It has become more acceptable to our investor base, to our board, to our management team and the motivation is obvious: it’s a high-growth category.”

The investment Scotts had made in the cannabis industry has also extended beyond new acquisitions. Hawthorne built a 50,000 square-foot research facility to test out how effective the company’s products are at aiding in the growth of cannabis.

Whether it was indoor lighting or new nutrients to include in its fertilizer, Scotts committed to finding the best way to help cannabis growers the same way they’ve helped homeowners keep their lawns and gardens green for the last 150 years.

However, Scotts has conceded that not all of its products are aimed specifically at cannabis growers. The company hasn’t completely abandoned its roots and taken the business in a new direction.

However, Hawthorne Gardening is generating roughly 90% of its sales from the cannabis industry and continues to make up a large share of Scotts’ overall revenue.

Jim Hagedorn explained his game plan for Hawthorne and the cannabis industry, telling Forbes: “We’re not getting into pot growing.

We’re talking dirt, fertilizer, pesticides, growing systems, lights. You know it’s a multibillion-dollar business, and we’ve got no growth in our core.”

Through its substantial investment in the cannabis industry and the acquisition of several notable brands, Scotts has a plethora of products that will be appealing to cannabis growers.

In fact, there are over 40 brands under the Hawthorne Gardening Company umbrella, most of which are geared toward the cannabis industry.

These brands offer far more than just fertilizer and pest control. They also provide lighting, air filters, and a host of equipment that can aid in the growing process.

Hawthorne also goes the extra mile with consulting services that can assist cannabis growers with lighting layouts, plant nutrition, disease control, and countless other aspects that relate to the growing process.

Of course, Scotts doesn’t have a monopoly on the cannabis industry. There are a variety of products offered by companies outside of Scotts and its subsidiaries that would be of great interest to cannabis growers.

In terms of nutrients, we highly recommend checking out Lotus Nutrients, one of the more established players specifically in the cannabis market (vs Scott’s lawncare pivot into cannabis).

For starters, there are the seeds that grow into cannabis plants. These can come from a wide variety of seed banks, and the exact seeds you buy will depend largely on the strands you wish to grow.

The biggest international purveyor of high quality cannabis seeds is Seedsman Seeds, who also have one of the biggest inventories in the world when it comes to strain varieties. Growing all starts with a seed, so no matter how much fertilizer you use, if you don’t start with a good seed you’re going to struggle with your cultivation.

Cannabis growers will also want to consider growing their plants with organic or GMO-free fertilizers. Long-term growers can improve the quality of their soil over time by using organic fertilizer, which also helps to improve the water retention and airflow of the soil, ultimately leading to higher-quality plants.

The possibilities are endless, as is the potential growth. It’s a bright future in the world of cannabis, and Scotts Miracle-Gro is smartly joining the fray. 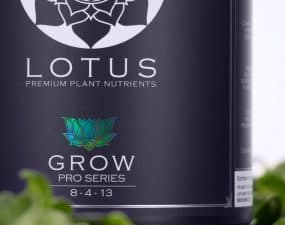 A Comprehensive Overview of Lotus Nutrients

When most people think of a lotus, they picture a beautiful flower with symmetrical leaves and striking colors floating on … 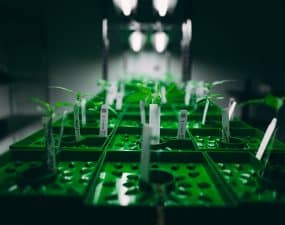