The company was founded after 5 years of intensive research, planning, and commitment to the cause of educating consumers about weed and making the product available across the country.

Their mission is to encourage people to learn more about cannabis and love it as much as the company founders do.

Houseplant does not just focus on producing and selling new cannabis products and strains but also helps to educate users on different strains of cannabis and how to ingest the products.

The company teaches consumers everything they need to know about using marijuana including how to roll a joint and much more. Houseplant’s website is also as hilarious as Seth Rogen’s comedic-style can get.

Unlike many other fly-by-night celebrity cannabis “brands” Houseplant was years in the making and was born out of a personal passion more than an opportunistic business play.

As Seth put it himself: “Houseplant is a passion we’ve brought to life through drive and dedication and is a business that reflects years of education, first-hand experience and respect we have for cannabis.”

Houseplant is committed to delivering superior quality products and education to all Canadians. Their strategic partnership with Canopy Growth, a leading cannabis production company in Canada, ensures the highest quality product growth in the best facility and overseen by experts in the cannabis industry.

The company’s strains are grown and processed to satisfy the needs of both beginner and expert cannabis users. Houseplant has three major strains with the brand names Houseplant Sativa, Houseplant Indica, and Houseplant Hybrid.

All of the company’s products have an easily identifiable design to ensure that customers get the real deal when shopping for the best cannabis strains in Canada and beyond.

Who is Seth Rogen?

Seth Rogen needs no introduction to comedy movie lovers across the world. He is the guy whose voice you hear in the role of Pumba in the recently released remake of Lion King.

Rogen has also starred in other well-known movies such as Long Shot, Good Boys in South by Southwest. He is hugely popular in the cannabis culture after featuring in stoner movies such as Pineapple Express, Superbad, and Knocked Up.

Houseplant’s co-founder Evan Goldberg is also a household name in the film industry. Marijuana features prominently in the duo’s films such as Pineapple Express in which Goldberg played a key role.

As an outspoken supporter of marijuana, Seth Rogen publicly celebrated last October’s decision by the Canadian government to officially legalize cannabis on a federal level.

Since the legalization, Canada has become a leading marijuana business hub with millions of dollars being invested in the industry.

Houseplant was started by Seth Rogen and if you can’t trust Rogen with your weed then who else can you trust? When you want to enjoy a fine meal you look for a high-end chef but when you want the finest strain of weed then Seth Rogen is definitely the person to listen to.

There are many things that separate Houseplant from the rest of the marijuana companies in Canada.

For instance, Houseplant is not just your regular cannabis startup but a company founded after years of experience with the product. Each element of the company from growing to distribution was thoughtfully designed by experts in the industry.

According to a statement by Canopy Growth just before the launch of the company, Houseplant’s goal and mission are to educate people and help them learn to love marijuana just as the company’s founders do.

Unlike other companies in the same industry, Houseplant doesn’t just sell weed but educates users on how to use different types of their cannabis products.

If you visit Houseplant’s website, you’ll be pleasantly surprised to find a lot of Seth Rogen and Evan Goldberg’s humor in the entire content of the site. They even have three 80s-like informative but entertaining videos that teach consumers a lot about marijuana and Houseplant branding.

According to Rogen, Houseplant is a passion shared by the team and brought to life through a drive to succeed. All the decisions made by the company are based on years of first-hand experience, education, and their strong respect for cannabis.

Another reason why Houseplant is uniquely different from the rest is their partnership with Canopy Growth, who are leaders in marijuana production in Canada.

Canopy Growth contributes to the success of the company by offering creativity, research, state-of-the-art manufacturing, and infrastructure support to Houseplant.

Canopy Growth is an already successful company with operations in 12 countries across 5 continents. The company has marketing and endorsement agreements with popular celebrities such as the Hip-Hop icon Snoop Dogg.

They also recently launched a new line of CBD and hemp products in collaboration with media mogul and homemaker Martha Stewart. Canopy Growth has a minority stake in Houseplant.

Houseplant launched its first strain of cannabis known as Houseplant Sativa in April 2019 online and via regulated retailers in British Columbia.

Since then they have released other strains including Houseplant Indica and Houseplant Hybrid. They sell pre-rolled joints, dried cannabis flower, and soft gels among other cannabis products.

Each of the Houseplant strains comes with an easily identifiable design and branding to help customers differentiate high-quality Houseplant products from the rest.

Seth and company have even produced 3 limited edition Houseplant vinyl records to match each of the strains with appropriate musical styles. Thus the sativa vinyl is a bit more upbeat and energetic, while the indica is a bit more mellow and chill, and the hybrid is in between.

We made Houseplant LPs, each with a strain specific mix of songs. The Sativa LP is full of upbeat music, the Indica LP is super mellow, and the Hybrid LP is right in the middle.

Houseplant’s products are designed for both experienced and new users of cannabis products in Canada. Their goal is to provide an intuitive marijuana shopping experience for Canadian consumers via online and physical retail stores. Their products are readily available on their website with deliveries nationwide.

They also have a subsidiary brand known as Tweed and have maintained a long-term relationship with rapper and marijuana advocate Snoop Dogg.

Since 2016, Canopy Growth has been selling three strains of marijuana by the name of Leafs by Snoop. The three products are known as Ocean View, Sunset, and Palm Tree.

There is no denying the market dominance of Canopy Growth but the underdog lover in us really wishes that people like Seth would also work to elevate some smaller, potentially higher quality, boutique craft cannabis brands.

Obviously smaller craft growers don’t have the capacity for national fulfillment like Canopy BUT Houseplant could still do some limited releases or seasonal strains that elevate smaller independent up-and-coming cultivators.

Houseplant is a Canadian marijuana company dedicated to quality, guidance, education, and promotion of cannabis products to Canadians and the world at large. Seth is a very logical ambassador for cannabis, like Mickey Mouse of Disney World his face and laugh are hallmarks that instill instinctive trust.

In the long run the more people that give cannabis a try the better in our opinion and for that we have to applaud Seth and Evan and the Houseplant team for packaging up what can be a pretty sketch industry into a beautiful “mid-century modern dinner party” vibe that defuses some of the negative cultural stigmas.

That said, Canopy Growth is to cannabis in North America (since the U.S still hasn’t legalized it federally the giant Canadian mega-corps are dominating purely based off scale) what GM is to the automotive industry.

We would love to see Rogan and crew elevate some smaller non-Goliath growers. Many of these craft brands will never be able to fulfill thousands of pounds nationally but would still make for great limited releases and collaborations.

Seeing Houseplant not only thrive on introducing new and latent smokers into “the scene” is fantastic and if Houseplant also introduced other smaller growers and their strains to the mix the party would be all the better for it.

That said we wish nothing but the best for the brand and it’s not like it NEEDS any help, Canopy knows how to grow solid flower there is no doubt in that. 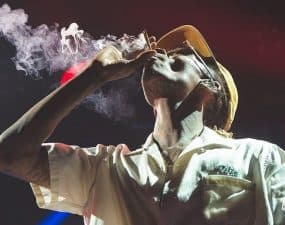 In case you aren’t on Instagram and are thus living in the stone ages, actor Seth Rogan (known for playing …