For decades, cannabis growers almost always grow, for one thing, flowers! In the following article, I will discuss signs of identifying female cannabis plants as well as what you should do with your harvest of these flowers.

If you are a first time grower it’s probably best to order some feminized seeds from a reputable seed bank to minimize your odds of having male plants “ruin” your crop prematurely via pollination.

Cannabis may either turn out male or female in sex or worst case turn out to be a hermaphrodite plant, meaning it has both male and female plant features.

The early stages of identifying female plants might be looking at your plants and the difference in height and structure of the plant. Male plants tend to be tall and “stretchy”, whereas female plants are usually squatter in structure when going from the vegetative growth stage to the flowering stage.

A cannabis plant goes into flower during the later summer months when the days are shorter and the nights longer. It’s easy to spot a female during pre-flower, you will see the pistils that form the flower growing out of the calyxes.

After five weeks after the flower starts to form, you will start to notice the aromas and trichomes forming on the flower. It may take from 8 – 18 weeks for a cannabis plant to fully flower and be ready for harvest.

It’s obvious that once your plant has sexed as a female, it will have stigma growing rather than anthers. These anthers are found on male plants and form the structure of pollen sacks. The pollen found in these sacks is used to pollinate the female bud flowers and produce seeds.

As a grower, it’s unfortunate that pollen from a male plant can travel over 10 miles in the air and still pollinate female plants. So always important to remove male cannabis plants in your garden or even from your surrounding community.

Most growers grow a cannabis crop for the flower that it produces. This is usually harvested off the plant, dried, and trimmed into small buds or bugs. The harvested flowers are the basis for most recreational and medicinal products on the market and may be used as is or processed into other products like concentrates or edibles.

The flower is increasingly being processed into concentrated cannabis ( concentrate ) in the form of bubble hash or dabs in a variety of forms. The quality of concentrate that is made is hugely dependent on the initial flower that was used.

So it’s important to initially identify your female plants initially during growth, but also look after them during the flowering phase of their lifecycle. Good cannabis flower goes a long way in this day and age, and in most places, your right and duty to grow a plant or two. 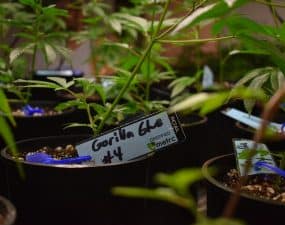 Autoflowering vs Feminized Seeds: Which Is Best for You?

Autoflower vs feminized, engineered vs regular, trained vs untrained seeds. No matter how you slice it, there is a dizzying …

Seedsman Review: Cannabis You Can Trust?

The conversation around cannabis has, for long, been dismissed as a drug problem or has been branded as irresponsible. But …