The cannabis industry has been expanding steadily over the past few years, with Arcview Market Research and BDS Analytics predicting that the global spending in the field will triple itself from $9.5 billion in 2017 to a projected $32 billion in 2022.

This global trend can also be seen influencing the United States with more and more states legalizing the use of medical marijuana (29 states + Washington, D.C.). Recreational marijuana also won the favor of citizens across the country, with Michigan becoming the 10th state in the country to legalize it.

Till now, this growth was relatively inconspicuous but trends suggest that it will take a more aggressive form over the next decade. If you are looking to invest, there isn’t going to be a better time than now.

Before talking about some of the companies to look out for in the years to come, let’s try to get a basic understanding about the trends that govern the cannabis industry in the United States.

Trends in the United States

Business is never straightforward. The cannabis industry is not an exception to this rule. Before talking about the game changers in the industry, it is important to understand some key considerations.

First, Canada has a stronghold over the industry as the country legalized the use of recreational marijuana in 2018. Even before that step was officially taken, there was anticipation that led to more investment in the market. For this reason, some of the biggest players in the cannabis industry are based out of Canada.

Despite this, according to projected estimates for 2022 put together by Arcview Market Research and BDS Analytics, the U.S. is expected to account for about 80% of global marijuana sales. The U.S. market is 10 times the size of the Canadian market. 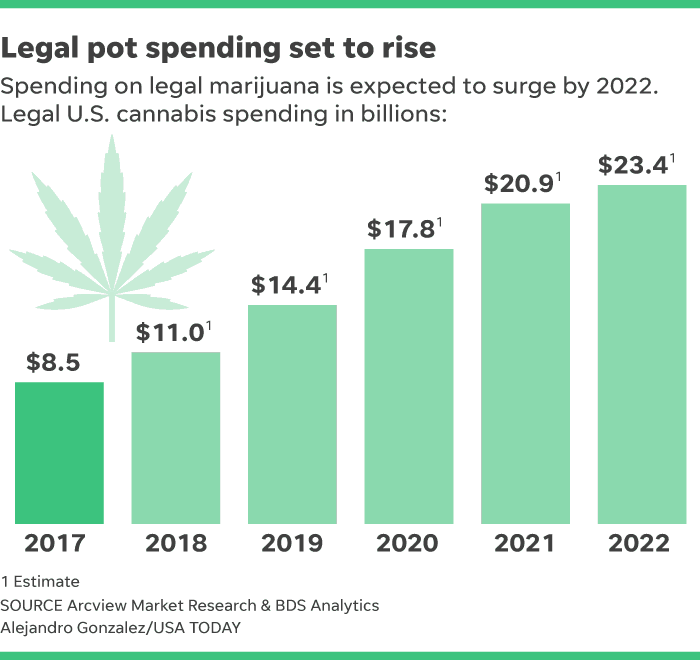 Another factor to consider is the changing political climate in the country. There has been a significant decrease in the skepticism with which cannabis was regarded in the U.S. As long as proper legal standards are in place, the cannabis industry is not expected to face unwanted prosecution. Under The Farm Bill, 2018, the hemp industry also got a significant push.

Keeping these factors in mind, here are some of the major players in the cannabis industry, which cannot be ignored in the years ahead. They also account for some of the best marijuana stocks, if you are looking to invest right now. However, you need to keep in mind that these are projections and not guarantees.

KushCo Holdings is different from many of the other companies mentioned in this list, as it has no part to play in the growth or cultivation of marijuana.

KushCo specializes in packaging solutions and as the industry tries to handle the boom, a significant amount of expenditure carried out by cannabis-related companies will be expected to move towards packaging the products.

There has been a significant growth in the demand for vaporizers in the United States, Canada and Europe, which can be harnessed by KushCo Holdings as they move forward.

While a lot of attention is paid to Canada, Europe also provides for a large market, especially with more countries looking to legalize medical marijuana. The competition is relatively lower in Europe, when compared to North America.

KushCo has acquired some big players in cannabis industry – outside of its traditional packaging – to diversify its portfolio.

For example, it acquired Summit Innovations in May 2018 to delve into the supply of solvents and hydrocarbons. Hydrocarbons and solvents are both important components when it comes to the extraction of cannabinoids from cannabis plants.

The company is also working towards branding and marketing solutions. In July 2018, it acquired Zack Darling Creative Associates, which could make a great addition to the company when it comes to handling marketing and e-commerce down the road.

Such expansion can help KushCo Holdings in handling the pressure if larger companies specializing in packaging solutions try to make inroads into the cannabis industry in the years to come.

Former known as CannaRoyalty Corporation, Origin House has been one of the oldest names in the industry. The company was originally launched in 1985 but has been able to keep up with the times even when the market is taking on newer challenges.

California is the largest regulated cannabis market in the world right now and Origin House is directing a large chunk of its resources towards building a name for itself as the host of some of the best cannabis brands in the world. The company is concentrating on the distribution side of the business, with the help of the best logistics and support.

The aim is to bring as many of the new and already established brands – they already have over 50 brands – on board so that they can benefit from the world-class service of Origin House.

The company itself has attempted to diversify within the cannabis industry, giving more attention to fields like research, intellectual property and infrastructure. All of these are expected to help Origin House in increasing their distribution networks and providing better support to its partners.

Origin House is working aggressively towards gaining control over the California market, with approximately 70% of the dispensaries in the state stocking the brands that the company offers.

After the legalization of recreational marijuana in the state, the market is expected to cross the $7 billion mark, earning Origin House a big chunk of the marijuana sales in California.

It is important to note than Origin House already owns some of the best-selling brands that the company distributes. Distribution accounts for almost 70% of the company’s revenue, a huge chunk of which is brought in through Origin House-owned brands.

As the company expands and acquires more cannabis brands, this figure is expected to increase significantly. This makes Origin House a good option if you are looking to invest in stocks as well. 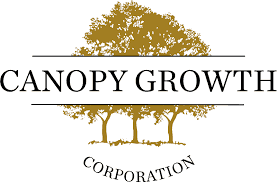 With a market capitalization of over $6 billion, Canopy Growth is one of the largest players in the cannabis industry at the moment. It was originally founded as Tweed Marijuana in 2013, and changed it to Canopy Growth Corporation two years later, in 2015.

This company is charge of operating multiple cannabis production sites with a capacity of over 2.4 million square feet. In addition to this, Canopy Growth also controls 500,000 square feet of Good Manufacturing Practice-certified production area.

Even though Canopy Growth operates in five continents, this isn’t the company that will be discussed here.

The emphasis here is on the Fortune 500 company Constellation Brands. While Constellation Brands holds the first position when it comes to premium beer – as it handles brands like Corona and Modelo – it has made an entry into the marijuana industry after getting a 38% ownership stake in Canopy Growth.

Constellation decided to take the plunge into the cannabis industry, as it was able to realize the future prospects of cannabis when it comes to beverages – for example cannabis-infused drinks – as well.

As the global cannabis market grows manifold over the next decade or so, companies like Canopy, in partnership with Constellation Brands, will be able to hold on to a significant chunk of the market.

While it is unrealistic to assume that they will be the only big players, it is possible for them to hold close to 40% of the Canadian market and about 10% of the rest of the world. 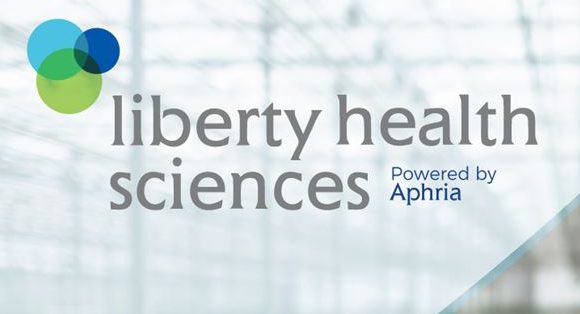 This name can come up as a surprise for many people familiar with the industry as Liberty Health Sciences is a pharmaceutical company that runs medical marijuana dispensaries just in Florida, which is a much smaller market than California on the other coast. Further explanations will be able to clarify the importance of this company.

While the cannabis market in Florida isn’t the largest even in the United States, it stands to take the third place in the country as early as 2022.

According to Arcview Market Research and BDS Analytics, the projected marijuana sales for the state are expected to reach close to $2 billion dollars in the next couple of years.

This can be a game changer for Liberty Health Sciences as the company remains one of the few licensed producers of marijuana in the state of Florida, controlling almost 15% of the market share at the moment.

This share of the market can increase significantly – even up by 10% – if the company is able to stay on track with the expansions planned for its production facility and open up more dispensaries across the state.

In addition to this, the company is attempting to move across the border of Florida and pick up more opportunities in other medical marijuana states like Ohio, Massachusetts, New Jersey and Pennsylvania in the near future.

With Aphria Inc divesting their entire interest in Liberty Health Sciences, there may be some questions that arise but it is important to note that the divestiture was a part of the current trend with Aphria. In under a year, the company has parted ways with at least 4 of its investments.

The last major player to be discussed on this list is Ontario, Canada-based CannTrust Holdings. With a market capitalization of close to $850 million, CannTrust remains one of the world’s largest marijuana companies.

With a 60,000 square foot hydroponic facility in Vaughan, Ontario, the company has recently completed some other projects like the 450,000 square foot Niagara Greenhouse Facility. It produces over 100,000 kgs of flower each year, covering the western provinces of the country with its distribution and supply agreements.

Overall, the CannTrust stock is one of the most popular ones in the cannabis industry, and it doesn’t look like it will stop growing.

As was discussed earlier, the global cannabis-infused beverage market is likely to pick up in the years that lie ahead. CannTrust has a global patent on technology that enables the mixing of CBD/THC in many different water-soluble solutions – for example beer and wine – with great ease.

This makes the company a big player in the game as the cannabis industry expands across the world.

Even if you are not putting this factor into play, CannTrust was set up to fulfill one purpose – getting standardized medicinal cannabis of the best pharmaceutical quality out into the global market. The company did this in the best way possible, without much show.

As a result, while CannTrust remains one of the big players, it routinely gets undervalued by others in the field, making for a great investment opportunity and even a likely option when it comes to big acquisitions.

The cannabis industry is looking at massive gains in the years to come, making it an ideal destination for investment. With more political backing and changing mindsets, it is no more looked at as a problematic or controversial field.

There are 29 states in the country that have already legalized medical marijuana and more and more are allowing recreational use of marijuana as well. While there was a concentration of the cannabis industry in Canada, that is likely to change, giving more opportunities to US-based firms to find their place.