Let’s say that you enjoyed a joint in the parking lot a week ago, and now you’ve been asked to drive your prim-and-proper mother-in-law to the hospital using that same car. You hardly notice the very mild — though quite pleasant — odor of MJ, but you’re worried that mommy dearest won’t feel the same way.

In this and countless other scenarios, many of which involve freaking out over the thought of being pulled over by the cops (and their drug dogs)while your vehicle smells of weed (even though you definitely never drive under the influence, and cannabis is perfectly legal where you live), you just want that weed smell gone from your car.

Table of Contents show
Why Weed Smells Linger in Cars
How to Prevent the Buildup of Cannabis Odors in Your Car
Oops, Too Late! My Car Already Smells Like Weed: How to Remove Odors That Already Exist?
In the first category of simple and easy DIY anti-odor steps that won’t cost you a dime, you can:
If you don’t mind going through some extra trouble and are willing to spend some money, also:
Herb CEO Summary

Why Weed Smells Linger in Cars

Any experienced stoner knows that cannabis smells really don’t tend to stick around that long. You can comfortably have a joint in your home and be rid of the smell of weed by the next day. Cars, though, are a different story entirely. Why does the smell of weed linger in cars?

These principles don’t apply to cannabis alone. Far from it. Anyone who’s ever had a hamburger and some fries in their vehicle likely regretted it afterward. Thankfully, avid weed consumers are far from powerless in the fight against persistent weed smells in their cars.

Like in any other domain of life, you have two basic options — prevention and cure. Let’s examine both further, so you can keep your car smelling fresh.

How to Prevent the Buildup of Cannabis Odors in Your Car

There are a few different ways to prevent cannabis odors from building up in your vehicle in the first place. The most obvious way to do this is to avoid smoking weed in your car. That doesn’t mean you can’t enjoy cannabis there, as you could try enjoying some edibles or even vaping (which, interestingly, doesn’t quite cause the same odor buildup) instead.

If you’re going to have a spliff in your car anyway, and especially if you’ll be doing that on a regular basis, you still have preventative tools. Open your car windows while you’re smoking your weed, and lean out. This obviously isn’t suitable for every situation, but it works in an increasing number of places.

Have your car’s air filter replaced frequently, at least once every six months, to help cart unpleasant odors of all types off. Keep dryer sheets around in your vehicle, and place them in the precise locations where weed smells normally tend to build up, like the crevices of car seats.

In terms of really loud skunk, even without burning it that stuff can smell so it’s probably worth investing in a smell-proof stash box of some kind to keep those pristine terps under control until it’s time to blaze.

Finally, use one of the dedicated anti-weed-smell sprays now on the market, as a preventative step, before you even start smoking. Don’t use traditional air fresheners, which are full of volatile organic compounds, because they’re neither effective at eliminating weed smells nor great for your health. 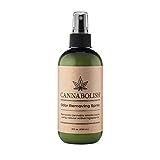 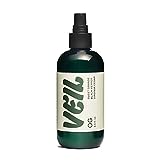 Oops, Too Late! My Car Already Smells Like Weed: How to Remove Odors That Already Exist?

No worries — with the right tools, that weed smell will be gone in (almost) no time, and your car will smell (almost) as good as new. We’re not gonna lie. Your cleanup job will be slightly trickier if you’re trying to hide the effects of years of smoking weed in your car, perhaps in preparation for selling it, than if you just smoked a joint there once. Either way, however, you can expect decent results.

The ways to eliminate weed smells from your car can be divided into roughly three categories — those you can get started with without buying any products, those that involve spending a little money, and investing in specialized weed smell sprays.

In the first category of simple and easy DIY anti-odor steps that won’t cost you a dime, you can:

If you don’t mind going through some extra trouble and are willing to spend some money, also:

Finally — and we’ve saved the best for last — you can make full use of one of the many weed smell sprays that have found their way onto the market in recent times. Here’s a look at some of the best commercially-available weed smell sprays:

The final verdict? Opening your car windows and deploying a weed odor eliminator will give you winning results every time. Not smoking in your car is the best solution yet to avoid the problem altogether. If you hot boxed last night and are concerned your mom is going to smell it the next day there’s not much you can do short of a full car-steam detail costing hundreds of dollars.

Vaporizers and edibles are great scent-free alternative forms of consumption you may want to look into if you’re figuring out how to get lifted outside of your house and don’t want to ruin the pristine interior of your vehicle.

If you happen to enjoy the smell of cannabis (unburnt) check out this guide to cannabis scented gifts which include things like candles and sprays that smell of all the terpene goodness without the harsh burn smell associated with actually lighting up.